Four men, a techno monkey, and lashings of ginger beer. 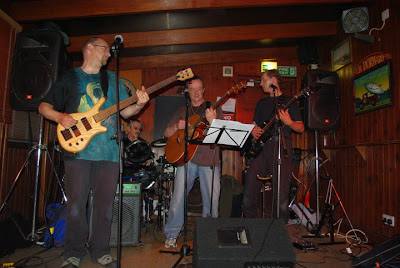 Well what can I say.

Greetings to all, from M, the resident Techno Monkey.

Saturdays comeback gig at the Harbour Bar was Epic!

A big thankyou to everyone who begged, borrowed and stole transport and crashing space for the night to get to see the guys play. The pub was crammed, the music was awesome, the atmosphere was amazing and a liberal amount of ginger beer flowed.
(Actually I could have done with a little less ginger beer, dancing in an over-enthusiastic manner under the influence has left me sporadically lurching around like John Cleese, but as this is my second partying induced injury and the first was embarrassingly caused by dancing drunkenly to KYLIE I can at least claim this one was a bit more rock and roll. Erm, if anyone quotes me on that by the way I will deny it.)
The evening was a total success and as comeback gigs go, I don't think we could have asked for anything more.

Polk rock is back :) And it's about time! Watch out for more gigs in the pipeline, details will go up on the website and on facebook as soon as we have confirmed dates.
Also, as those of you who made it to the gig will know, we now have band tshirts available, small and medium skinny fit ladies and medium and large standard tshirts, all with front and back print. £10 plus postage If anyone wants one. Drop us a line and we'll make sure you get one :)

Can't wait for the next night of HZ stupidness, hope to see you all there!

Oh, before I go... a few special thankyou's are in order I believe.
Firstly to Our Beloved Bop, for being drunk enough to treat us to a repeat performance of her 'mock line dancing' routine during Cowboy Song. I'm glad to say that even though Zephyr were collectively wetting themselves laughing at her they still managed to play the song through successfully. (No mean feat, all I had to do was drink my beer and I nearly spat that on the floor when she stole Geoffs hat and 'got down' in a 'country stylee'. )
She's regretting it already, mainly due to the fact that we're expecting her to do it every time now, but that's the price you pay for being just a bit too entertaining.

Also thanks to Roy and the Notts crew for doing an almost 900 mile round trip and helping us out with the tshirt production. Hats off to you guys for dedication to the cause :) and to April, for not falling into a bush, and to everyone else who kept the cd's and spread the word and appeared out of the woodwork at the first sign of a Zephyr gig. Kudos!

Right. I'm off to poke Freak with a spoon and torture him into agreeing to write a regular blog for you guys to follow, wish me luck :)
Posted by Hoodoo Zephyr at 11:08 2 comments: